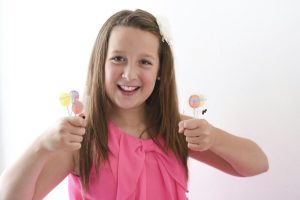 When Alina Morse was 7 years old and was offered a lollipop at the bank, her father told her she shouldn’t have candy because the sugar was terrible for her teeth. Instead of pouting, she put on her thinking cap.

After researching that tooth decay is the single greatest chronic illness facing kids, she talked with her dentist and dental hygienist about alternative ingredients that could be put into a lollipop to make it taste good — and clean teeth at the same time.

They told her about ingredients with strange-sounding names, including Xylitol and Erythritol. And Zollipops was born.

It took a few years before getting the treats from concept to store shelves, which she accomplished in 2014. Now a 12-year-old seventh grader in Wolverine Lake, Michigan, Alina has built a successful business with a loyal following not only in the U.S. but also in far-flung places like China, South Korea, the United Kingdom and France. Five million Zollipops have sold so far — five times more than Alina’s original goal — earning the business over $1 million.

“We reinvest the majority of the profit back into the business, which helps us grow more so that we can supply product for our larger retailers and support our cause,” she explained.

“In the beginning I was just hoping that I could help kids have a candy they would like that parents wouldn’t feel guilty about letting them have,” said Alina.

But soon the business expanded its mission with a “250,000 Smiles Initiative,” which donates 10 percent of profits and a selection of products to support oral health education in schools and select organizations that register on the company’s website.

The product line has expanded as well. Zolli Drops were introduced in early 2016 after some customers expressed interest in a stick-free alternative. Zaffy Taffy, a chewy version, arrived in summer 2017.

“Of course, school comes first,” said Alina, who divides her afternoons into thirds—one-third for homework, one-third for business updates, and one-third for dance lessons or playing with her younger sister, Lola (who came up with the name for Zollipops).

In fact, school is one of the reasons Zollipops weren’t an overnight success. Along with family members, Alina experimented only on weekends with various ingredients and flavors for more than a year before finding an allergen-free manufacturing plant to work with, using $7,500 her grandparents had given as gifts over the years to cover start-up expenses.

“A lot of people think kids are immature, and occasionally buyers don’t think it’s my product,” Alina said. “But I go to sales meetings and trade shows and am on sales calls, and am really active in the business. We make it happen as a team.”

Zollipops, which cost $5.99 for a bag of 25, come in six flavors. Alina’s favorite flavor: orange.

Young author has been writing for years — already

His dad wouldn’t give him a toy, but helped him start a successful business instead