Father and son team is all about food, but their passion is not profits

Dr. Isaac Horton III and Isaac Horton IV are partners in several businesses, all centered on food. Most recently, the father and son team opened Oak City Fish and Chips, a restaurant in downtown Raleigh, N.C. They already had a fleet of food trucks serving the Raleigh area. Next up are two restaurants downtown, including one in  the northern part of the city that will be their most ambitious effort yet – a restaurant based on the farm-to-table concept except the farm is a hydroponics facility located right at the restaurant.

The restaurants are part of a lifelong commitment to entrepreneurship and innovation for Dr. Horton. He has more than 30 years of business experience starting with a corporate career in research, manufacturing, international sales and marketing and strategic planning. He left the corporate world in 1994 and has more than 20 years’ experience as an entrepreneur. Dr. Horton has been awarded more than 140 patents, taken companies public, acquired international companies, sold companies, raised millions of dollars and won top awards both regionally and nationally.

Dr. Horton strongly believes in passing along wealth, knowledge and inspiration to the next generation and has brought his son into business ventures. In fact, although Dr. Horton helped set up Oak City Fish & Chips, his son is the owner and operator.

But the two are so aligned in their views on entrepreneurship – and life in general – that in a recent interview they frequently finished each others’ sentences. (To distinguish them, they will be identified as Isaac III and Isaac IV.)

Q: Tell me how Oak City Fish and Chips got started.

A: Isaac IV: From a young age, I wanted to be an entrepreneur and to make money. I had a business mowing lawns at age 7. I was also getting a $5 week allowance… I went to Kmart and I wanted an X-man action figure. I saved my money up and I had $20 and I think it cost $27, something like that. My parents gave me the rest of the money but it taught me something. I said to myself, ‘Man! After a month of work I don’t even have enough money for an action figure? I need to make more money.’….My father always made sure I understood how much things cost. 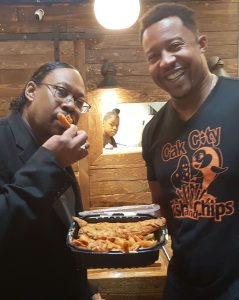 Isaac III: When we went on our vacations, they were real nice vacations … We had a five-bedroom house on the beach in the Dominican Republic, for example. But I always made him understand that you’re getting these things but it really cost a lot to have this life….We’ve been to 40 countries. And we would always take one day and serve people on our vacation. We’d bring food, we’d give money, we went to the hospital…I wanted them [his children] to see what most people in the world were experiencing.

Isaac IV: From a very early age I felt a sense of responsibility…. My dad always told me that it was important to have more then enough, not from a position of greed but from a position of benevolence because at some point God was going to call you to take care of someone else. So self-sufficiency is important because that’s the first step in being able to bless others.

Q: Why did you want to start a business dealing with food?

A: Isaac IV: (He explains that he went on a religious mission to Nicaragua in college and saw people starving.) There were people living at the city dump. These were the poorest of the poor…I thought that it was crazy that 2000 years after Jesus that there are still people here who are dying because they can’t find food…I said, ‘This is inexcusable and I can do something about this.’

(The trip was in 2011; by 2016, the father and son team had established a food truck business that has grown to four trucks. But they had in mind to establish a restaurant.)

I live in downtown Raleigh, maybe 30 feet away from this building, and every day I would go for a walk around downtown and I would walk past every major construction site in downtown so I could be cognizant of economic development. And I walked by this building and I saw the first day they put up the sign [for Morgan Street Food Hall. Oak City Fish and Chips is located inside the Morgan Street Food Hall, a relatively new concept in which several restaurants are housed inside one building fitted with common areas so patrons can get food from any of the restaurants and sit in common areas]. I called and I called.

Isaac III: He was the first person to sign up. He called me and said, ‘Dad, downtown is changing and we have to be part of it.’

Isaac IV: The lines have been out the door. We opened Aug. 21…Oak City Fish and Chips has been the No. 1 restaurant in the food hall for eight weeks straight.

Q: What are your plans for the future?

Isaac IV: We’re opening a second restaurant in on Rock Quarry Road in about two weeks. That’s in Southeast Raleigh [the traditionally African-American part of the city]. You know Oak City Fish and Chips is the only 100-percent black-owned restaurant in downtown Raleigh.

[The father and son team also talked about a restaurant they hope to open sometime early next year that will use food grown through a hydroponics growing system.]

Isaac IV: It’s going to change the way people think about food and how they feed themselves for generations…

Isaac IV: …Forever! We’re on the brink of a paradigm shift. It’s tantamount from the shift to a car from the horse and buggy … As a little kid I looked at my grandfather and said, ‘Horses? How did you people get around? What if you wanted to go to Virginia?’ He said, ‘It would take a day.’ In the same way, my grandchildren will look at me and say, ‘Grandaddy you mean to tell me you used to grow your food in the dirt and you used to pour water on it?’ It will be scarce then. ‘And you guys used to spray chemicals on the food you put in your mouth? You guys were barbarians.’

How to deal with entrepreneurship and loneliness