"I don't regret my failures; I learned more from those than I have from my successes."

Kristen Joy Laidig describes hereself as a “serial entrepreneur.” She has created a mind-boggling number of successful ventures in business, writing, crafts and other fields. Her accomplishments include writing and publishing 18 Kindle books in 18 weeks, starting more than 50 publishing companies for others, publishing more than 200 books and e-books, teaching hundreds of webinars, and coaching thousands of authors from idea to published. (She calls this effort “turning authors into successful authorpreneurs.”)

A resident of Chambersburg, Pennsylvania, Laidig’s business ventures include thebookninja.com, a website that provides a wide variety of training products for writers, as well as Toy Box Gifts & Wonder® in Chambersburg, Pa. These days she spends her time mostly as a consultant and venture capitalist.

Laidig sat for this interview with Rising Innovator: 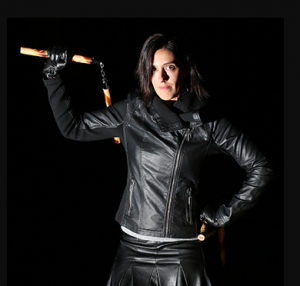 You started your first business when you were 6 years old, selling pet rocks? Tell us about that experience – where did you get the idea? Was it a successful venture?

It had the potential to be a great success until my father shut me down… I was taking rocks out of my driveway and selling them and he was like, ‘I’m going to have no gravel left.’ They were gravel rocks with faces on them. My friends couldn’t get them from the store because their parents said, ‘They’re too expensive. We’re not going to buy this for you. They’re just a fad,’ or whatever. I found a niche market for my friends whose parents wouldn’t buy them, and I capitalized on that. And mine were cuter because I made funny faces on them and some of them were custom – to customize a rock, it was 75 cents.

That’s ingenious — where did you come up with that idea?

I would see stuff that was a fad or a trend and I would jump on that and try to make something similar. I’ve just always been that way. I saw that custom stationery was becoming a thing when I was in sixth grade so I created a stationery creation company and I would hand draw the stationery myself, and I made quite a few sales in school…

And then kids [in high school] would complain about being hungry during class and lunch period was so far away so I created a “vending machine” business in my locker. I had the school’s permission until they decided it was such a good idea that they were going to put in a real vending machine. That lasted about two years until they shut me down… The candy business was very successful, but I tended to eat my profits. Hey, I was in high school!

When I was in college, I did web design, when Dreamweaver was first becoming a thing, and I did graphic design, and I also started a stained glass company where I created sun catchers and I did shows – art shows and craft shows – and had my stuff in a couple of different shops.

Then when I got into publishing I was actually working for a different publisher first before I started my own publishing company. I helped start his company, then moved on to start my own…

You say in your bio that you have “never been able to hold down a real job.” I assume that’s said somewhat in jest since you have such a successful career, but it’s probably an indication that people (like yourself) who have a strong entrepreneurial mindset think a bit differently about work than the average person. How would you describe that difference – what type of person makes a good entrepreneur?

For me it was one of those things where I could always see ways to do something better and corporate policy would be holding back either the people who worked there or the customers or just the company’s progress in general. I understand why they have those rules in place, but I’m a firm believer in mom and pop meets corporate, where you can have some corporate guidelines like how money is counted and how it’s handled and policies about drugs and firearms and all that kind of stuff… but the mom and pop side is ‘Hey if you have a problem with your manager, come talk to us We’re the owners.’ Most run-of-the-mill jobs, it’s ‘Here’s your job description, here’s what you do and that’s it.’ You’re stuck if you have any creativity at all.

Looking back on your career, what would you say are the most important lessons you learned that you can offer to a young entrepreneur starting out today?

If people say you’re going to fail, do it anyway. Either you’re going to prove to them that you’re not going to fail and you make it work, or you will fail and you’ll learn a lot. I don’t regret my failures – I learned more from those than I have my successes. If anything, my successes felt good and then they disappeared, but the failures stick with me… I learned what was going to work and what wasn’t going to work.

What are two or three hot businesses that you would recommend?

The online space is always growing. Online training is hot. Digital products are crazy hot in that you can create them once and sell them over and over again. You can quickly and easily set up with basically a website and a PayPal account – you don’t really need much more than that. Getting started in that space is extremely easy, but becoming an established expert is a whole ‘nother ballgame. But if there is something people can teach about or write a report about or write a book about like a short kindle book, it is definitely worth going for.

The only other really hot business space right now is ecommerce… There’s so much print-on-demand stuff that you can do right now where you don’t have to have to hold a lot of inventory, like mugs. People buy mugs, they buy tons of them, they buy even ugly-designed mugs… The online space is where it’s at.

How to accept payments for your business – four popular ways

How to price your product or service – three easy pricing strategies