This business uses youth as a strength

Who better to provide advice on reaching your generation than you? 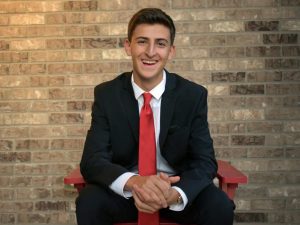 At 16, when he walks into a room of potential clients—in his case, people he wants to help communicate better with today’s youth, known as Generation Z—all eyes are on him. That’s the good part. The not-so-good part is that despite being chief executive officer of Deciding Edge, a consulting business that has put him in front of some of the country’s top organizations, he’s too young to close a deal.

“But I’m getting rid of that weakness and accentuating that strength,” said Josh, who came up with the idea for Deciding Edge when he was 13 and launched the business at 14.

He’s talking about his recent partnership with XYZ University, an international consulting firm that will help him get clients. Together they’ve released their own research on workforce trends among Generation Z, who now make up one-quarter of the U.S. population, earning Josh more credibility in the industry as a result.

“The potential for this business is sky high,” Josh said. “It’s really about finding people who are willing to take a chance on you, and then learning from them.”

The high school sophomore from Minneapolis, Minnesota, has learned a few lessons on his own. Perhaps his biggest was getting a shot to do business with a very successful organization but missing out on that opportunity because he wasn’t qualified to take on every service he offered.

“Bigger doesn’t always mean better,” he explained. “I had to scale back and find my niche.”

Josh spent much of 2016 defining that niche, building his reputation as an expert on how businesses can best reach customers his age—through technology.

At the same time, he feels compelled to break the stereotype that Generation Z prefers technology over face-to-face communication.

Josh started Deciding Edge with around $2,500, money he had in his savings account, to cover the cost of a website, logo and legal fees. On a typical day, he makes a couple of work calls when he gets home from school, then does homework. After dinner with his family, he relaxes for a while before spending between 9 and 11 p.m. on business matters.

“I have an immense passion for entrepreneurship, leadership, and business, and I know that this is only the beginning of my career,” he said.

So far, he has made some money through speaking engagements—in front of as many as 600 people—and has made a small profit, though he expects to generate much more revenue in 2018 because of the groundwork he has laid over the past year, including his new partnership.

“We already have a few clients that are interested, and our research is only going to get stronger and stronger,” he saids. “I’m hoping that will snowball and I’ll really be able to do some damage in the field.”

Idea for her business came from wet feet