Experts advise young entrepreneurs to find a need and fill it – and that is exactly what Jack Griffin did when he was a 16-year-old high school student in Duluth, GA. Only he found a need more desperate than what most businesses deal with – food. Griffin saw a TV news story about a homeless family and decided he needed to do something about it.

He was not, at the time, a do-gooder who was always getting involved in charitable causes. But something in the family’s tale motivated him to act.

“It struck a chord in me,” Griffin recalled. “I was the same age as one of the kids in the story. It looked like it could have easily been me.” 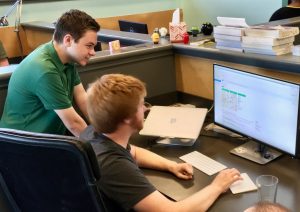 One thing Griffin quickly realized was that there were places to get free food but people who needed it did not know where those places were. So Griffin decided to start a website, Foodfinder.us, that allows people to find free food in or near their neighborhood.

Griffin’s experience shows that you don’t have to have a lot of money or advanced skills to start a successful business. As Griffin explained it, he was responsible for the “ideation” but found others to create his website. “Doing the most with what you’ve got is always important,” he stated.

Through crowdfunding, he raised $6,000 in about a month from “friends, family members and strangers.” It was “exhausting” finding partners for the business, Griffin said. But eventually he got a website up and running.

“Start small,” he advised. “You don’t have to have a super-polished website from the start.”

With the help of Stable Kernel, an Atlanta-based mobile technology firm, he was able to develop a smart phone app.

Griffin, who is now 21, went on to attend the University of Michigan, from which he graduated this past spring. But he never forgot about his business; in fact, while in college he was able to significantly advance it with the support of fellow students and professors.

Foodfinder originally focused on schools in the Atlanta area but now allows website visitors nationwide to find food banks and other sources of free food by ZIP code. You don’t even have to know the ZIP code – you can just enable the location on your smartphone or computer and it will find nearby food sources.

Shortly after graduation from college, Griffin travelled to Washington, D.C., to talk with officials at the U.S. Department of Agriculture about how nonprofit organizations – like his – can help fight hunger.

Griffin’s company reached another milestone after graduation – he began working for the company full-time. He also began drawing a paycheck for the first time. Not only that, but he is employing a chief operations officer.

“I really never expected to be able to make a living from Food Finder,” Griffin said. “That’s something I never imagined.”

Griffin wants people to know that building his business was hard work but believes all the work has been for a worthy cause. “The economy is improving but there were 2.6 million searches for food pantries on Google in 2018,” he said. That number is more than 5 times what it was 2013, he said.

One of the things about his success that makes him most happy is that it is an example of an old problem being addressed in a new way. “Using technology for good – I’m always happy when people do that,” he said.

A family of popcorn entrepreneurs

Idea for her business came from wet feet