A day at the fair

It’s fascinating to see what ideas young entrepreneurs come up with, and chatting with them can be fun, fascinating and hilarious. Young Innovator staff attended the Children’s Business Fair on Saturday, Oct. 7, at the North Hills Mall in Raleigh, N.C. Here is our report:

One of the great things about kids’ businesses is the names they come up with. They don’t agonize over the perfect name. Judging by the businesses at the Children’s Business Fair, they just choose the best fit. 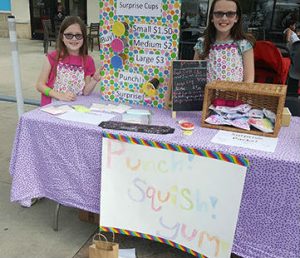 For Eleanor and Ruby Hamilton, 9 and 7 respectively, that was Punch Squish Yum. The sisters were selling gift cups – paper cups filled with soft, spongy objects that you can punch and yummy candy that you can eat. Or you could pick up packets of slime that you can squish.

Asked the inspiration behind their business, Eleanor explained, “We really like squishing things.” The items they sell were once used as party favors for the girls’ joint birthday party (they were born two days apart). They liked the favors so much that they decided to use them as the basis for a business.

Seems to us that any business aimed at 9 year olds that has anything to do with slime has potential. 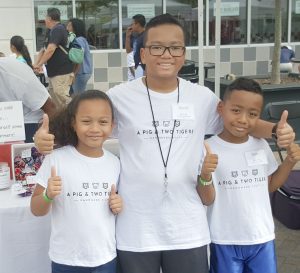 The hand warmers are small cloth-covered sacks that you pop in the microwave. They even had hand warmers covered with the logos of area universities for a more personalized product.

“They’re perfect for gifts!” David yelled to passersby at the fair.

They appeared to be doing a brisk business. 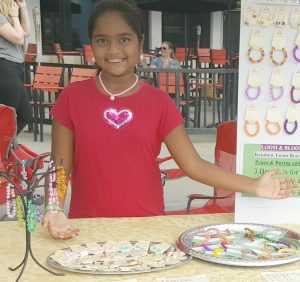 Just because they’re kids doesn’t mean they don’t understand marketing. Yasha Nagathan, 10, was selling key chains, bracelets, charms, earrings and bracelets that she made herself. Her business, Loom & Bloom, is two years old and is not very sophisticated – yet – but she has a plan.

“I just make things for fun,” Yasha explained, “but I want to take this to the next level so that’s why I’m here. Now I want to create a website and sell online.”

And although she might make things for fun she does put some thought into it. “I think of what girls and boys – my customers – might like,” she explained. “Like right now, Halloween is coming up so I have a lot of things that are orange and black.”

Sienna and Savannah Forrester, 11 and 10 respectively, followed the same path as Punch Squish Yum; if you like it, others will, too. The sisters had a spa day about a year ago in which they were treated to skin-softening scrubs. It occurred to them that the scrubs might be a product they could sell. Brown Sugar Sisters was born.

At the fair, they sold a variety of scented scrubs. Asked how they make the scrubs, Sienna did not try to hide its simplicity. “We make them from a kit,” she said. “We just follow instructions.”

They did have a nice selling technique, though: They set up a station to try out the different scents. We tried the butter vanilla and were hooked; we handed over our $4 with our soft hands. 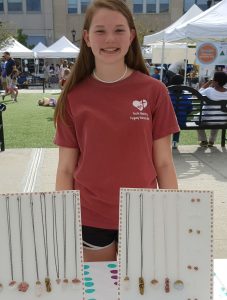 Simplicity seemed to be the theme at the Children’s Business Fair. Katie Balfour, for instance, did not do an elaborate analysis when she started her business Katie’s Cakes and Crafts. Asked how the business started, Katie, 14, explained: “I’m starting to buy my own clothes so I needed money. Also, I’m trying to save up to go to the state fair, so this is a good way to save up some money.”

She had a winning strategy, too: she was selling jewelry made from crystals, painted or dyed with food coloring to make them crafty. But she didn’t want to put all her eggs in one basket so she had brownies and cookies for anyone not enticed by the jewelry. 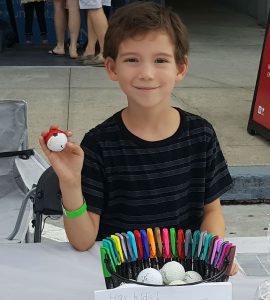 Caden Medford’s business also had a simple beginning: The 8-year-old lives with his family on a golf course, and mishit balls are always rolling into their yard. “They come to look for [the balls] but we have this big bush and once they get to that they usually give up,” Caden explained.

One man’s lost golf ball is another man’s (or, in this case, a kid’s) business opportunity. Wonder Hit Fly sells golf balls that Caden decorates with emojis, masks, tiger stripes and other designs. Using permanent markers, he will even paint a custom design.

The youngster says he sells the “upcycled” balls back to golfers. They can collect and display them, or they can reuse them – at least the colorful balls would be easier to find.

NOTE: The event was sponsored by Acton Academy, the Acton School of Business. The photo at the top is of a gathering of fair participants and parents at the end of the day.

28 awesome free tools for young entrepreneurs during the coronavirus quarantine

The three biggest entrepreneur trends in 2022

Be careful when expanding your lemonade stand

How to deal with entrepreneurship and loneliness