Woman without a plan (well, not at first)

Deneen Brown admits that luck was a key ingredient in the success of her family business – Brown Estate Winery. In fact, the family never even set out to start a commercial winery. When her parents bought land in 1980 in Napa Valley – California’s famed wine country – they had in mind only a summer home. They started growing grapes mostly as a hobby.

Even in 1995 when Brown and her siblings took over the vineyard, they did not intend to establish a winery. But after realizing how desirable their grapes were to area wineries, they decided to start their own rather than follow their parents into the medical field.

Through trial and error and with the help from friends, and after surviving a disaster, Brown Estate Winery has grown and prospered. Their story shows that entrepreneurs don’t necessarily have to start out with a great plan as long as they are determined and willing to work hard. (And a little luck now and then doesn’t hurt.)

Learn more about the winery here.

We talked with Deneen Brown, who serves as the company’s president, about her experience.

Q. Your parents sound like extraordinary people. For one thing, they must have been extremely successful – I can’t imagine that many people had the means to purchase a ranch (even one that had fallen into disrepair) in Napa Valley in 1980. I also find it fascinating that they got the idea to grow grapes from a realtor who told them they could not grow grapes on the land. They sound like smart, resourceful and determined people. Is my impression of your parents accurate?

A. Our parents were visionaries who founded a pioneering medical practice in South Central Los Angeles in the late sixties. After achieving a level of professional success they wanted a project that would allow us all to work together as a family. Purely by chance they found this abandoned walnut orchard in the Napa Valley. The realtor who sold them the property may have thought he was dashing a dream by cautioning them against trying to grow grapes, but the truth is they didn’t have any preconceived ideas about what they were going to do out here. They just fell in love with the place. It was only after meeting and talking with neighboring grape farmers that they started thinking about planting a vineyard. They saw a way of life informed by the allure, romance, and practical sense of an industry that back then was less about making money or a name for yourself than it was about love for the land, craftsmanship, and a cooperative spirit — all of which resonated with them. 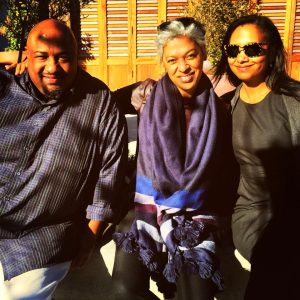 Q. Your blog states, “In 1995 we kids decided to make our own wine.” I can’t imagine it was that simple. Please describe how that came about – was it something that had been carefully planned for a long time, or did the idea arise suddenly (and if so what was the spark)? Were you confident that you could succeed, or did you see it more as a gamble and a long shot?

A. The decision pretty much was that simple. The pivotal factor is that after we’d been growing and selling grapes for about five years we understood that our fruit was something special based on how it was being handled by the producers who were buying it. We literally had a “We should bottle it and sell it ourselves” moment. We did some research, started small, had extensive on-the-job training, benefited from a lot of generous guidance from industry colleagues, learned everything along the way, encountered no end of outsized surprises, kept our heads down, pressed on, and here we are. It’s a very long game.

Q. How many “kids” are there? (I see three Browns listed on your team – are you all siblings?)

Q. You give a pretty good history on your blog, in narrative form, but I’m wondering if you could share some numbers – how have you grown since Brown Estate Winery was launched in 1999 in terms of employees, sales, number of products sold, etc. – any metric you could share that would show how the business has progressed.

A. We started out making one wine, our flagship Napa Valley Zinfandel, and for our first three vintages (1996, 1997, 1998) we produced just 700 cases per year. In 2000 we added Cabernet Sauvignon, in 2002 came Chardonnay at Mom’s request, Chaos Theory debuted in 2004, and from there we’ve expanded our Zinfandel offerings and added a few more varietals, as well as some “pop-up” wines like Betelgeuse and Duppy Conqueror. As far as the business side of things, we are still entirely family-owned and -operated but now have about twenty employees… and we produce a lot more wine now than we did when we started.

Q. You say on your blog that the winery’s success “was not a master plan” and that “two generations of our family have been taken by surprise.” Please elaborate – that suggests almost a casual, laid-back approach to making wine yet other aspects of your history evidence a strong determination (e.g. coming back after the fire) and devotion to detail necessary to produce fine wine. To what do you attribute the winery’s success?

A. There is nothing casual or laidback about farming vineyards and making wine, but our family’s involvement in both of these activities came about in a very uncalculated fashion. Mom and Dad did not set out to become vineyard farmers, nor did they intend for us to break into the wine business. They were continuing to run their medical business in So Cal and expected all of us to get our MDs and join their practice. What they didn’t foresee was farm life leading us to take a business interest in the ranch. We began managing the grape contracts which is how we became aware of that our fruit was sort of coveted. Making our own wine was a logical next step so we did a little research and ultimately really trial-and-errored our way through establishing our wine label and later obtaining our bonded winery permit. Mom and Dad went through a period of mourning over our derailed medical careers but, fortunately, we were able to console them with Brown Zin.

Q. The Brown Estate Winery is “Napa Valley’s only Black-owned estate winery.” Are there other winery’s owned by African Americans anywhere else in California’s wine country? Why are there not more black-owned wineries?

A. It’s important for us to clarify that we’ve staked our claim as Napa Valley’s first Black-owned estate winery not because we’re full of ourselves but rather to honor our parents’ commitment and sacrifices to an enterprise that was very much a family endeavor. The estate winery distinction is important — we grow, produce, and bottle our wines on one contiguous property that we own. Basically, we control the means of production from top to bottom. That said, there are many models for making wine and we certainly are not the only Black people doing so in the world or in the United States or in California or in Napa. But as far as we know, 25 years later, we still are the only Black-owned estate winery in Napa.

We aren’t scholars on this subject because frankly our lives are entirely consumed with our Brown Estate project. But what we do know is “I’m going to start a winery” is more than a notion. Barriers to entry on the production side, never mind farming, are steep from both capitalization and regulatory perspectives. Our entrance into this space was in many ways accidental and largely on our parents’ shoulders, and our learning curve as far as growing and evolving the business has been 25 years and counting. The wine industry has never been more dynamic, nor has it ever been more demanding.

Q. What has kept you motivated, and what advice would you give to other entrepreneurs (in the wine business or otherwise)?

A. We are motivated by the fact that Brown Estate is our livelihood, not a hobby — we don’t have a fallback position. As well, 25 years into it we’ve reached a stage where the love we get back from our consumer audience really sustains us. Our advice to anyone proposing to start or already running a business is, as Mom is fond of saying, Measure twice, cut once. Or to put it another way, Think big, start small, learn fast. One of our greatest advantages through the years has been staying lean and nimble. Being able to bob and weave is critical to long-term success.

The story behind Brown Estate Winery has given us clarity about how life sometimes present opportunities when we least expect them. With a little perspective, hard work and adaptation, any business can rise to soaring heights while being at the right place and time. Thank you Deneen Brown for sharing your story with us.

Do you have an unexpected success story? We’d love to hear from you.

From journalist to news entrepreneur

From office job to entrepreneur