Car seat that prevents baby deaths is her latest idea

Twelve-year-old Lydia Denton has been brainstorming inventions since second grade but she only came up with ideas for inventions – like a cabinet that would keep children from medication by only opening with a parent’s facial recognition or fingerprint.

But after hearing on the radio about babies dying after being left in hot cars, Lydia decided she had to go a little further. The North Carolina tween created an actual sample – or prototype –of another invention that could help parents avoid that nightmare.

“I’m always thinking of solutions to problems I see around myself,” the North Carolina tween said.

Indeed, it is a serious problem. In 2019, the United States had 52 hot car deaths and most of those are under age 2, reports the National Highway Safety Administration. “I was surprised about what was happening,” she said. “Our phones can do so much. Cars are really smart.” 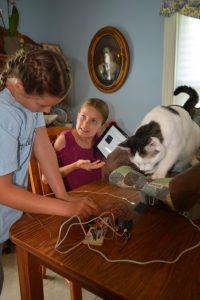 Lydia Denton and her sister, Bethany, work on her invention. Even the cat, Navidad, helped.

Lydia knew it would be upsetting if that happened in her family, so she researched potential solutions. There were smart car seats designed to prevent hot car deaths, but they were expensive. “I live in rural North Carolina and I go to a Title I school [meaning many of the students come from low-income families],” she added. “I wanted to make sure that they could afford it so anyone could have access to [my invention].”

That’s what inspired her to create the Beat the Car Seat, an affordable car seat that can sense when the temperature in the car reaches 102 degrees and alert parents and emergency responders if a child was left alone in the car seat. Starting at the end of fifth grade and continuing for the next six months, Lydia worked to bring her invention to life.

Her first several attempts didn’t work, but Lydia kept trying, with help from her family. Older brother Elijah helped fix some bugs in the code, and her younger sister Bethany helped when Lydia needed to solder (connect) pieces in the circuit. Bethany also provided snacks and encouragement. “Anytime I would get frustrated or discouraged, she reminded us of the why we were doing this,” Lydia said.

Even the family cat Navidad helped out by serving as a test subject to make sure the pressure pad worked properly. That meant that parents and emergency responders wouldn’t get an alert if the car seat was empty.

Lydia said the experience of building the car seat taught her that inventors need to be willing to start over and try lots of different approaches. “Six months of work and about a hundred tries isn’t bad for something that could lives,” she added. “Inventing is fun but it can be frustrating. Inventors have to try over and over again.”

That hard work paid off. Earlier this year, Lydia’s car seat invention won the $20,000 grand prize in CITGO’s Fueling Education Student Challenge. The contest challenges fifth through eighth graders to use STEM learning and create an invention that solves a problem in their community.

Some of the prize money will go towards continuing to work on the Beat the Seat Car Seat and make it into a product available for purchase. “We’ve talked to a lot of people—engineers, patent attorneys who are helping me figure out what the next step should be,” Lydia said. “We know parts of the inventing process but we don’t know who to get it out there.”

In the meantime, Lydia has lots of other invention ideas. She and two classmates developed a wristband that measures oxygen levels and can alert 911 with the GPS location if the wearer is in danger from drowning, an asthma attack, or an allergic reaction. For that invention, they were finalists in the Samsung Solve for Tomorrow contest and won $15,000 for their school.

Lydia and Bethany are working on an invention together. Because they have to constantly reapply sunscreen under their eyes, they’re looking at ways to combine sunscreen and temporary tattoos so the sunscreen around their eyes doesn’t rub off from sweat or goggles.

Lydia encourages other kids to try their hand at inventing things that could help people, too. “Many times adults see a problem and their first thought is to complain rather than solve the problem,” she said. “Rather than just complaining, look for ways you can make the world better.”

Can podcasts help your business?

What entrepreneurship means to me